Again, “The Annals of Unsolved Crime” by Edward Jay Epstein may peak your detective impulses. Part One, “Loners”: But Were They Alone, lists ‘The Anthrax Attack on America.” 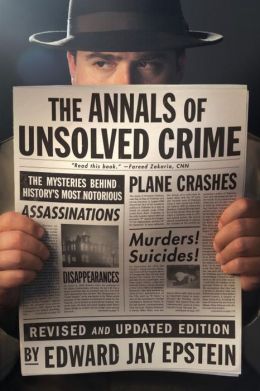 I searched Mr. Epstein’s website and asked questions about the case. If I hear back, I promise to post his answer in my next blog. I remember after the FBI said they had identified the culprit and closed the case, one of their scientist suspects drove his car off a Maryland bridge. I do not recall the day or name. I did think, because of the proximity to DC, that he might have been a paid perpetrator with connections to the criminals.

Returning to Epstein’s article, he reiterates the unanswered questions of the case on his website.

Besides my bridge-suicide theory, I thought Epstein might have gotten closest to the truth of at least one of the conspirators, when he found the CIA had learned in 1999 that al-Qaeda employed a Malaysian scientist, Yazid Sufaat, to build an anthrax lab near the Kandahar airport in Afghanistan.

The first notes sent with anthrax to NBC and the New York Post read, “THIS IS NEXT. TAKE PENACILIN. NOW. DEATH TO AMERICA DEATH TO ISRAEL ALLAH IS GREAT.” The second note was sent to Senator Leahy and to Senate majority leader Tom Daschle. It read: “YOU CANNOT STOP US. WE HAVE THIS ANTHRAX. YOU DIE NOW. ARE YOU AFRAID. DEATH TO AMERICA DEATH TO ISREAL ALLAH IS GREAT.” Both notes imply an al-Qaeda motivation.

There was a prior anthrax case in Florida. Dr. Christos Tsonas in Fort Lauderdale described lesions on Ahmed Alhaznawi’s leg consistent with pictures he was shown of anthrax lesions. Alhaznawi died in the crash of United Flight 93 on 9/11.

What were your conclusions at the time, and now?

One Reply to “Here is Another Unsolved Mystery . . .”