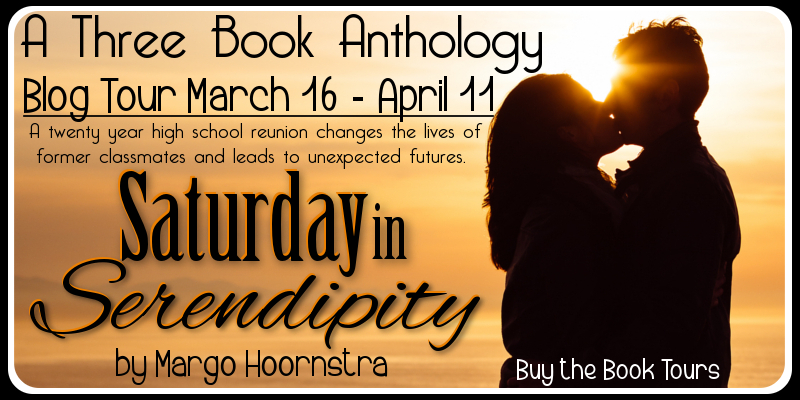 Three Strikes Thursday
Barry Carlson, a pro baseball success, could have any woman he wanted. Except one. Twenty years before, Barry won Amanda Marsh’s love, only to crush her heart. He’s returned to Serendipity, determined to win her back. Recently divorced, Amanda is happy—until Barry slides back into her life. Can they put aside old wounds and new misunderstandings to find a forever love?

Two On Tuesday
Blane Weston’s construction company needs the venture capital Matt Durand has. With his reputation for hostile takeovers, she wants no part of him. Mixing business with pleasure, she’s off to Serendipity to hook up with a former flame. Not used to being denied, Matt follows. How can Blane enjoy a journey to her past when Matt is determined to dictate her future?

One Fateful Friday
His high school reunion in Serendipity over, hospital CEO Jake Holbrook regrets his single state. When a special woman from his past tumbles back into his life—and his bed—he’s determined to keep her there. Family practitioner Bethany Thomas avoids an entanglement with her new boss, but unknowingly betrays him. As the holidays approach, can they overcome a lack of trust to find their Christmas miracle? 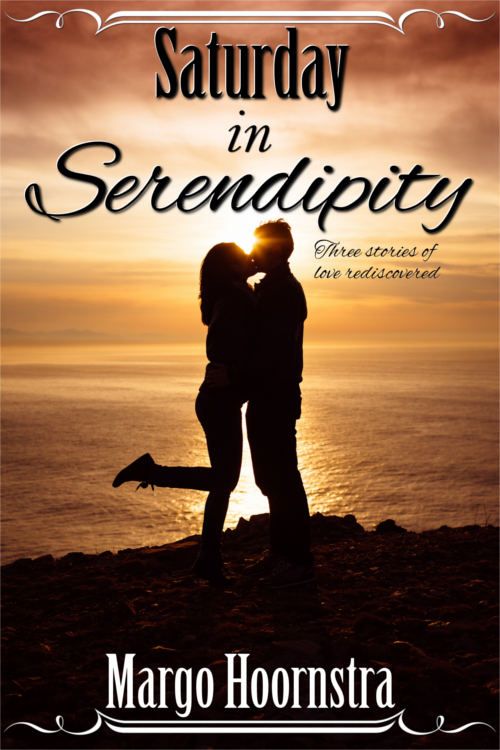 The solution was simple. Get out of the car, walk up to the house and ring the bell. Apologize for the intrusion when her father came to the door, and ask to see Amanda.

Only for a couple of minutes. Please.

Then he could fall all over himself telling her how sorry he was.

“Yeah that’s gonna fly.” His whisper filled the emptiness around him, and he dropped his head. “Face it, asshole. You blew it.”

In an odd way, talking to himself, he didn’t feel quite so alone.

He turned his gaze back to stare at Amanda’s window. The shade was still down. Her light was out.

So that was it.

Moving like a rigid, soulless robot, Barry put the car in gear and drove slowly away. Picking up speed as he left Amanda’s subdivision, he floored it once he hit the highway. With the windows down, the warm night air cooled as it roared around him.

He flicked the headlights on high. Their beams lit up the trees, telephone poles and bushes as they whizzed by. Nothing could stop him as long as he kept his foot down hard on the gas pedal. Then something did.

Pulling to one side of the deserted road, he jammed the gear shift into park, jumped out, ran around to the back bumper, bent over.

And puked his guts out onto the warm asphalt.

…up until a few years ago being alone suited her just fine. Lately though, call it a change in her biological timepiece, she entertained the idea of someone to share her life. Maybe even have a couple of kids.

All that remained was to find the right man for the job.

Car wheels crunched gravel, and she glanced out the window. A shiny black sedan pulled into a parking spot a ways away. Had Malcolm come out to the site for some reason?

She waited a moment to see. It was hardly the slight form of her business partner who emerged from the driver side a few minutes later. The green polo shirt on this man was unbuttoned at the neck and stretched to the limit over large, sturdy shoulders. Her gaze dipped to follow the expanse of a trim male torso then on to the jean covered outline of a noteworthy ass and long legs.

No doubt one of her foreman’s recruits reporting for work. An assessing gaze skimmed over him again. He certainly looked healthy enough for the job. Though she didn’t get why he drove a shiny new car instead of a rugged pick up like most of the others. Edging her head back in the seat, she studied him out the side window. Feet planted wide, something in the way he took in everything around him told her this one knew his way around a construction site. Doing another quick onceover of the man, she let out a sigh. Or life in general.

“You’re certainly eager to help.” They collected stacks of dirty dishes to carry into the kitchen.

The china he took care to place on the counter clattered. “Why would I pass up a chance to be alone with you?”

Smiling, she began to fill one side of the double sink with warm water and squired in some blue dish soap. “Lana seems nice. She’s a good fit for Joey.’

“She’s a good fit for the family.” Taking an assortment of plastic containers from a lower cupboard, Jake filled different ones with leftover stuffing, gravy and mashed potatoes. “They seem happy together. Joey’s a lucky guy.”

Switching the still running faucet to the other side, she passed some of the serving dishes he emptied under the flow before she positioned in the dishwasher. “You’re jealous of him.”

Though her words were tender, the idea behind them stung. He turned his back to open the refrigerator and began to stack the containers of leftovers on the middle shelf. “Yeah, I guess on some level, I’ve always wanted a family like he has.”

Closing the refrigerator door, he came to stand beside her. Bay windows surrounded the breakfast nook at one end of the kitchen. Beyond them, an early evening darkness couldn’t diminish the brilliance of a magnificent full moon. Shining across the spindle bare tree tops then in through the glass, its brighter than usual light revealed swirls of frost growing up the clear panes on the outside of the glass.

Easing a soiled pan into the warm suds, she lifted her head. “Why haven’t your parents followed the other snowbirds down south now that they’re both retired?”

“Dad says they can’t spend the money right now. He wants to be sure they’ll have enough to support themselves for a long time without having to cut back on their lifestyle.”

“In many ways, you’re so much like him.” She picked up the sprayer next to the faucet and rinsed out another dish.

She laughed then retained the cheerful smile. “That too.”

“That I think you have the same hair?” Looking over at him, she giggled again.

“No. That. The sound of you laughing.”

Her mood turned serious, and she rested her wrists on the edge of the sink. “One thing I rarely did with Brian.” She raised a brightening gaze to his. “And seem to do more of since being with you.”

“As it should be. But, again I remind you, I’m not Brian.” He’d repeated it to her so many times, at some point she’d have to begin to believe it. He just wasn’t sure when.

Like many writers, it’s hard to determine exactly when my fiction writing career began. I remember composing a short story in grade school (I have no idea about what) which was chosen for publication in an all school anthology. A journalism class taken in junior high school led to a job on the school newspaper and a weekly column.

I always loved reading. I loved writing too. Someday, I thought, maybe when I grew up and received the right training, I could actually write a book. After all, I was often told, laughingly most times, I had an extremely vivid imagination.

Through the years, the desire to write was always there. I had so many ideas and characters roaming around in my head, so many stories. But the business of living—going to college, getting married then raising a family—took precedence over something as frivolous as writing a book.

Then one day out of the blue I was downsized—effective immediately—from a job I’d held for over thirty years. What seemed so unfair at the time, I now recognize the tremendous gift I was given that day. As I’m now able to spend more and more time doing what I love—writing romantic fiction—I find I really do have an abundance of stories to share. 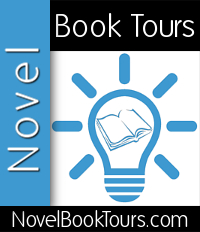 One Reply to “Blog Tour: Saturday in Serendipity by Margo Hoornstra {+Giveaway}”