During the draft stage, I failed to spend time researching Native American sacred burial sites. Rewriting the character-driven plot, I now notice the gaping lack of setting details. Google has come to the rescue. When last I sought details for Michigan tribes in my 1812 book “North Parish” I availed myself of two shelves of my hardcover books containing the customs and movement of twelve Michigan tribes. I cleaned out the shelves after self-publishing “North Parish.” The second and third books in the series “Floating Home” 1841 and “Love’s Triumph” 1879 didn’t require further study of the tribes.

These are the Google sites I’m now following:

In the early 1700s, it became clear the Appalachi had chosen the wrong European ally. The British had set their sights on weakening the Spanish missions in Florida.

In 1704, they overran the San Luis territory. The Spanish and Appalachi barely escaped, fleeing the mission and burning the buildings so the British could not occupy them.

In the ensuing years, the Appalachi who weren’t killed or enslaved dispersed or went into hiding. A group of their descendents eventually made their way to Louisiana where just a couple hundred descendents live today, still practicing Catholicism.

For thousands of years, Native American burial sites lay sacred and undisturbed. But in the 18th and 19th centuries, as cities and towns expanded, often they were plowed over or dug up by treasure hunters.

The Grave Creek Mound in West Virginia once housed the remains of the Adena civilization’s most respected members. In 1838, profiteers ransacked the site and tourists were charged an admission to look at the bones.

A 100-years later, in 1935, gold diggers became grave diggers when they stumbled on the Spiro Mounds in Eastern Oklahoma. So many artifacts were found that the site became known as the “King Tut of the West”.

In 1990, under pressure from activists, a federal bill was passed banning the illegal trafficking of Native American remains. Archeologists were given strict time limits on how long they could study bones and artifacts before returning them to their tribes. But the struggle continues, especially when graves are unearthed by construction.

In 1998, crews building a Wal-Mart outside Nashville found an Indian cemetery. Despite protests, the remains of 154 men, women, and children were unceremoniously removed.

Native Americans lived in what is now called Washtenaw County long before the first white person entered Michigan. In fact, the name Washtenaw comes from the Chippewa words waushte and nong, which together mean “the land beyond.” It is impossible to map the locations of Native American tribes because they overlapped each other so much. Several tribes lived in Michigan and surrounding areas: the tribes known as the “three fires,” the Pottawatomie, Ottawa, and Chippewa (also known as the Ojibwe); smaller tribes like the Sauk, the Foxes, and the Mascoutens; and the Iroquois nations who had moved west into Michigan when whites occupied New York and Pennsylvania. We can not really know what native life was like before the arrival of Europeans. Native Americans left no written record and few images that told about their lives, and very few whites spoke native languages.

But we can know a few things about Native American life before contact with Europeans. For the most part, Native Americans in this area lived by hunting and gathering. They hunted and fished, and ate moose, caribou, dear, bear, and small game like rabbits, squirrels, and fish. Some tribes grew rice, squash, and corn. They wore clothing made from the skins of the animals they ate, and used tools made of bone, sinew, and other animal parts, and their homes were made of mud and bark. With the exception of the Chippewa, Native Americans in this area also farmed corn, squash, and rice.

Tribal organization was very different from American political organizations, and white settlers often did not understand native politics. White settlers were often confused by native politics, and Native Americans often did not understand white practices. Tribes were organized into smaller units called bands, and each band had a chief. In most tribes the chief was just like any other member except when it came to making military or political decisions. 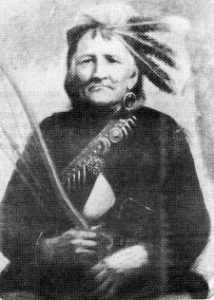 (right), chief of the Chippewa tribe from about 1789 to 1858 when he died. Like many other Native American chiefs, often under threat from American authorities Okemos signed several treaties with Michigan and the U. S. government that allowed whites to settle what had once been Chippewa land.

In many ways, however, the arrival of whites was disastrous for Native Americans. In the 1700s, about two thirds of the native population in Michigan died from diseases whites brought. Tribes lost massive amounts of land to the U. S. Government, for which they were often neither paid nor compensated. By 1820, they had lost claim to over half of Michigan’s Lower Peninsula. Most Native Americans and some whites thought that the government’s relations with Native Americans were marked by dishonesty, corruption, and deception. This poem by one local Indian official, Will E. Hampton, indicates such sentiment. By 1838, almost all native villages in Michigan had been abandoned. 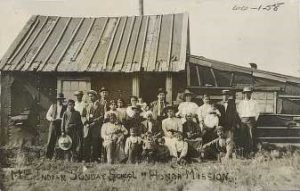 this one, for example, were intended to teach Native American children the ways of whites, including speaking only English. Thousands of Native Americans converted to Christianity and abandoned native practices. Over time their languages, religions, and traditions faded as native peoples became increasingly impoverished.

Despite these losses, however, Native Americans still profoundly affected the history of Michigan and the men and women who settled there. Even today Native American history remains important to the landscape, culture, and politics of Michigan. For example, Native Americans developed a system of trails throughout Washtenaw County to facilitate trade between what is now Michigan and neighboring states. These trails remained major traffic lines throughout the centuries, and today the Great Sauk Trail is highway US-12 and I-94 runs the length of St. Joseph’s Trail. Two maps compare Michigan highways to Native American trails. Native life also affected the geography of the population of Michigan. Several of today’s towns, Harbor Springs and Traverse City to name a few, grew up around native villages and the many missions, and schools across Michigan.