As I said to you when you handed me your book about Salome, I had a number of things on my desk to be taken care of before I could get to your book. I spent some time today reading it. I am not a literary critic. I am not an editor., I am not a book reviewer. I do know a little about Salome, indeed that is all anybody knows. So as a writer of fiction, you had a big opening to imagine what her life might have been like. You chose one path, Oscar Wilde chose another, someone whose name escapes me at the moment wrote an opera about her. One person imagined Salome was in love with John the Baptist and kissed his severed head when it was brought in. Where few facts are known–and few facts are known about her–one is allowed to guess at what might have been. Yours is as good supposition as any.

You have a nice fluid style of writing that makes it easy to read. I found the Biblical quotations intrusive, possibly because I have studied the Bible quite a lot and know that none of the New Testament passages you use were written  till long after Jesus had died, and possibly Salome as well. Thus they were jarring to me, though possibly not to someone not as knowledgeable about when the books were written as I am.

I think for a Christian this might be a very enjoyable text. For the non-Christian, it might be a bit confusing. It seems to presume a knowledge of the Gospels which a non-Christian would not have. But maybe your intended audience is all Christian.

Your portraying hostility between Herodias and Salome is a matter on which historians of the period have quite strong opinions, some in agreement with you and others strongly in disagreement. Some think the two women were very close. Given that you imagine Salome as a 14 year old, it could go either way–teenagers can be close to parents or in bitter rebellion against them. But given that she acts as her mother wishes suggests that she is a dutiful daughter. Herodias is as wicked as history claims her to be.

Almost fifty years ago I wrote a doctoral dissertation on Christian anti-Semitism. Among the many episodes in the Christian story that have allowed for and supported a negative view of Judaism is the story you tell on pages 306-307 of Pilate quaking before a Jewish mob that was demanding the death of Jesus. You follow the Gospels in saying that Pilate judged Jesus to be a just person. No responsible historian accepts that. Historians now are convinced that Jesus was put to death by the Romans, and not because the mob wanted him dead but because Pilate found him to be dangerous, a man who could rouse mobs. He was crucified, a Roman method of execution. There is no historical validity to the story of a custom at Passover time of releasing one Jewish prisoner. This whole section about  the death of Jesus–both in your book and in the Gospels–is not historical and has caused immense damage to the Jewish people. Cries of “Christ-Killer”, “Deicide” still ring in Jewish ears. I would encourage you to rewrite this section more in line with what historians believe to be the truth of that moment. This would in no way diminish the impact of what I take to be the central point of the book, namely the conversion of Salome.

All this may be of no use to you, but I am not a professional reader of books, only a reader.. 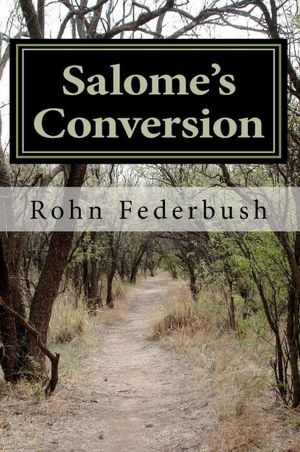