Titles come to me before a shred of storyline floats through my borrowed brain. The Christmas Party of MMRWA held in Hastings, Michigan developed a hint of a possible character arc. The waitress, who knew little or nothing about Hastings’ history, related she’d left Hastings years earlier only to return to her home town. I was struck by the burgs incredibly beautiful architecture, almost too grand for the town’s modest main street. 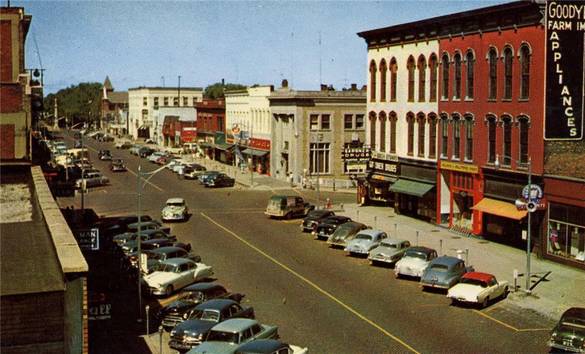 Two or three places of interest are on the town’s tourist list, a cider mill, a grist mill turned into a wedding venue site and a vintage park where significant buildings have been restored. Present day statistics reveal a predominantly Methodist, Caucasian, Republican citizenry. Not many of the town’s high-school graduates attempt college degrees. The lists of lists include the number of unmarried people living together. Conservative to the bone, it is.

So I began my first venture into historical records. A list of ancestry includes German 22%, Irish 12%, U.S. 11.5%, English 9.9%, Dutch 6.8% and Scottish 4.26%, which leaves only 54% accounted for. The U.S. designation made me wonder how many Native Americans where included in the ll.5%. One account says the first woman in town didn’t see another female for eight months, if you didn’t include the ‘Indian squaws.’ I need to find which tribe of Native Americans allowed her that luxury.

Spalding Manufacturing made sports equipment from the earliest days of the town and this might explain the source of income-tax-free monies available to construct the lavish buildings. Three Marshall citizens bankrolled a saw mill to be constructed after a Mr. Hastings sold them the town’s land. The first school room was housed in a tavern, the sheriff ran the post office and the first hotel owner arranged a stage-coach stop from the Battle Creek to Grand Rapids trip.

Another interesting statistic is the number of catastrophes the poor town has weathered, the most in the Michigan’s history. Perhaps this explains the lack of deteriorated buildings. They might have been washed away or blown to smithereens. I will research the standing buildings original beginnings, their layouts and subsequent owners. By then settings for the story’s scenes might come to mind. I admit research is half the fun of writing novels.