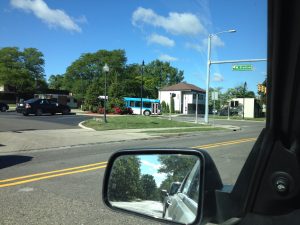 “Writing the Natural Way” by Gabriele Rico may transform my dull novel of 1994 into a richer tableau. The original idea was to bring redemption to our Nation by re-instating Native Americans burial grounds to various tribes who were stripped of land rights by greedy settlers.

My novel “Ann Arbor’s Bus Orphan” states the case in dry terms with a few interesting ghosts thrown in when the reader might have slipped completely into a coma.

Rico’s prompts on page nine resulted in the following:

Norman is an old-fashioned name. Mother explained it has something to do with Ulysses. Her drinking usually interrupted the story, but something about cyclops asking his name and Ulysses saying it was No Man made sense to her. Of course I never met my biological father. When the friends of the cyclops hastened to his cave after Ulysses put out his one eye with a stick, they asked who was hurting him. When the cyclops answered, “No Man,” they abandoned him to his fate.

Norman couldn’t remember a time when he didn’t feel deserted. The university was the closest to claiming a family, even though he was never invited to join a holiday celebration. So Doris’ friendship was crucial. Being an orphan, unloved, left him with a hole in his heart, something even Niagara Falls couldn’t fill.

Books were his only tangible friends—except for Doris. But he realized he failed Doris. Otherwise she wouldn’t have needed a man like Robert Westwood. He didn’t know how to show his emotions to her. All Norman was sure of was his lust for her house full of books and the orderliness she lacked. Life was worth a search for meaning in the chaos of things strewn pell-mell around a person. In order to demand reason, life required a place for everything.

His rising panic each morning attested to the power or preeminence she held in his life. Norman was at Doris’ beck and call. Would she ever acknowledge his dedication to her, or at least her library? Maybe he should write out why he needed to move in with her, with all the words at his command surely he could choose the most convincing reasons.