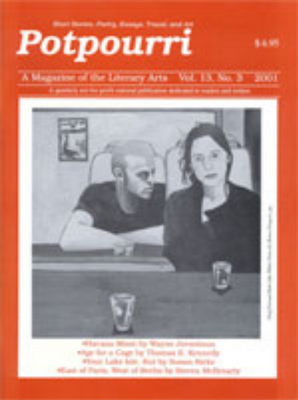 Annie recited her daily tirade as she passed the Vietnam vet, Hail, Harry, full of lice, the ghouls be with you. Humbled art thou amongst men and cussed is the shame of our nation.

Clutching her shopping cart, Harry pulled his wheelchair close. Holy cow, Annie of carts, pray with us sinners now, and while we remain homeless.

Amen, they said together.

Spending the day on every pedestrian strewn street in Ann Arbor, Annie finally wheeled her grocery cart around three levels of the parking garage before finding a sheltered corner behind a van to hide her long squatting. When she was done, she got in the elevator with her cart and pulled the stop button. After undressing completely, using water from a plastic bottle and a paper towel to clean herself, Annie danced to inner rhythms, stretching until she felt free of any fear.

God bless Isadora Duncan, she said out loud and then listened to see if she had aroused suspicions from anyone waiting for the unavailable elevator. No sounds answered.

Thanks to the Salvation Army, she put on her clean underwear and a man’s T-shirt. Black slacks hid Annie’s slight sag, and a red sweater covered her wrinkled neck. She brushed her white hair and rolled it up under a blue stocking cap. Leaning against the wall of the elevator, she clipped her toe-nails, using face cream on the calluses before changing her socks. Her shoes were a disgrace with one shoelace completely gone. Annie tucked them in the garbage bag with her dirty clothes. Pulling on brand new, stolen, cowboy boots, she found the gods were good. They fit. Applying more face cream, she washed her face raising a rash with the harsh paper towels.

A down-filled jacket with Jacob’s Bar on the back finished her get up. The toothbrush in its precious baggy and the rest of the toothpaste tube went in one jacket pocket. Then from her own ancient beaded purse, she counted two hundred forty-five dollars and eighty-six cents.

Trying not to think of the source of the money, Annie put one hundred in each boot, twenty in her hat and the twenty-five dollars and eighty-six cents in the jacket’s zippered pocket.

At the fifth level of the garage she got off and pushed the cart behind the roof’s projecting elevator shaft. If had been safe there for eight nights now, through a wind and rain storm. She gave it a pat good-bye.

Be back soon, she said, as if family awaited her return.

Coming out of the elevator at ground level, Annie remembered to jangle her keys to pretend that she had just locked her car doors. The padlock and chain on the cart didn’t really count. Everything in it was free for the taking.

Annie smiled at the first person she saw coming into the garage. He’d been there before.

How many times had she seen him? Maybe only during the last month after all the leaves disappeared from the trees. Annie didn’t remember seeing him while she was attached to the grocery cart. He probably thought she was real. Annie took a long look at him from the rear.

The unhunched shoulders under his trench coat meant he hadn’t been entirely cowed. His clothes were familiar to her, not the style; no doubt he’d worn the same blue sweater and jeans all month. She waited, knowing there wouldn’t be a car. Half an hour later he came out, less focused on his destination.

Gerard, he croaked, Hello. He recognized her, but it was from a black-and-white photo. Where would that have been?

I come here often, she said.

Me too. He smiled, yellow-toothed.

They’ll probably shut it down soon for health reasons or hire guards, Annie grinned back.

Well, there’s always public rest rooms, but this seems cleaner to me.

Me too. Then she asked, Have you had supper?

Sure you can. I’m treating. Annie felt a generous glow. It’s not every day you get to meet a stall mate.

He laughed, then held his hand over his mouth, surprised at the sound.

Annie cuffed him on the back. You’ve still got the spark.

Gerard walked with her, a little confused but taken in. The golden arches offered a hearty meal of chef salad, four ground rounds with cheese, cherry pies and coffee. She ordered large orange juices and chocolate milk shakes too.

At midnight the lights would be shut off. So after brushing her teeth thoroughly and rinsing her hair in the sink, drying it in the dryer meant for hands, Annie collected Gerard and they walked east toward the theater district.

Where do you sleep? he asked.

We’ll find a good place tonight, she said trying to think only of bath towels, the hot shower and steamy mirrors.

I walked all last night, he said. Finally I couldn’t feel my feet. I ended up out near the trees. The sun came up in a mist, Gerard raised and parted his arms to demonstrate the disappearing fog. I laid down on a dry rock ledge. I woke up at sundown.

We’ll find a nice place with a shower, Annie repeated for herself.

They won’t let us in. It’s too late for the shelters.

Not those. I know a place. You’ll have to wait outside till I get it set up, she lied. Sometimes he–it takes a while for me to get the place livable.

The stage-manager, really just the doorman. Annie shifted inside her clothes, nervous at the inquiry.

Behind a block of flint-black buildings, Annie placed Gerard behind the door on a handy crate and pounded on the door. It was opened by a silent, unseen hand. Annie smiled in the harsh light.

Gerard watched her wave, as the door slammed behind her. He sat for over two hours, alternating between the sad recitation of his angry life and wondering, What the hell she was doing, wallpapering and painting the place?

Gerard’s feet tingled from the cold. He knocked his heels against the wooden crate he was sitting on, hoping to warm the blood. How long should he wait for this old babe? He’d followed the frail woman after her generosity at McDonald’s because of the promise of a place to sleep. Now he wished he’d asked why she was homeless; but he knew he’d be questioned too…. But, how long was she going to be in there while he froze his balls in this cold alley?

He looked up at the frosty moon just as a cloud moved across it. Gerard held his arms up to it, as he had at the morning mist earlier. One star seemed brighter than the others; but as he watched the sky darken, heavy snow drifted down. Pumping his arms against himself now and stamping his feet, Gerard hoped no one saw his imbecilic dance.

Any of the restaurant owners in town could swear that he never professed to be a patient man. Not one of them escaped his temper tantrums, throwing dirty pots at the dishwasher, smashing streaked plates before his gourmet food touched them. It was a miracle the whole town wasn’t dead from food poisoning.

That calmed him down. Maybe that was the only Christmas miracle he could hope for; everyone else warm and housed, only he homeless from meanness. Just as he was about to knock on the steel stage door, Annie opened it, resplendent in blue satin and lace. He hardly recognized her.

She smelled of soap and her white hair was styled in a gibson puff; ringed in blue roses. Her blue satin gown was garnished with white lace up to her ears. Long gloves traveled past her elbows. Annie swept up her hem and proceeded ahead of him into a wood cavern of shadows.

Annie shushed him, We have to be quiet for a few more hours. Would you like a shower? She opened a door for him.

The walls were lined with pictures of her. All ages, all poses, all states of dress and undress. Gerard remembered now where he’d seen the black-and-white glamour shot. He’d been a cook at the Gaudy Dancer for five years. The photo hung on the wall with other, more famous Ann Arborites.

Annie touched his shoulder, Through there. I’ve found clothes for you. Give me your shoes and I’ll find a pair in your size.

In a stupor he gave her his shoes, showered and dressed. He threw his smelly clothes in the garbage can next to the sink. Gerard reviewed her picture studio. A glimmer of what was happening, of her probably occupation, almost awakened him. Seduced by the sultry shower, he sat on his trench coat in a corner with his head leaning against the wall. Across the room, a digital clock read 3:00am.

When Annie came back in another hour, she wore the old clothes he had first seen her in. You look nice, she said as she handed him both pairs of shoes.

His sneakers barely held together. The hiking boots fit perfectly. Thank you. He meant it. It’ll be like having new legs.

Whe she shook his hand, he realized how exhausted she was.

We have to go upstairs now, she said. It’s not as nice, but we can sleep safely.

Gerard followed her up winding stairs and steep ladders into a chilly attic loft with a bare mattress. A noise downstairs in the theater awoke Gerard around noon, according to Annie’s watch. They’d slept for nine hours in their clothes, boots and all. He put his arms around Annie to keep them warm and they slept on.

An hour or two later, they both awoke from the applause of an early matinee. Annie tried to straighten her hair, but gave up, pushing it under her knit hat.

Gerard took the hat off and ran his fingers through her fine white tresses, cupping her unlined face in his hands. She succumbed to his pleading and they made love, rumpling their clothes to a flurry of clapping from the final scene below.

Gerard apologized. I mean, if you didn’t want to. He watched her eyes water and then glaze over.

I never do anything. I don’t…. she stood and then whispered, I wish in all good faith to continue living. If I try to find my way I bark my brain. Every spark of likelihood has gone. What can we see in this light? Nothing… except flakes of drifting fear.

Yes, yes. I’ve seen the play. Gerard quoted, The world (was) looking frozen and forbidding under the moon; but I must be… who knows where, begin again.

Annie bowed deeply to him. You are making yourself a breeding-ground for love and must take the consequences.

Back to herself Annie said, The Lady’s Not for Burning. We can leave in the crush.

Once on the street, Annie seemed in a daze as if all her options had ended in the earlier defeat Gerard hadn’t witnessed.

Gerard took Annie’s arm. Look how great I look. I could have just walked out of a house with a Christmas tree. He spun around in front of her.

Annie laughed at him.

We’re a team, he said. It’s too late for breakfast at St. Andrews.

Gerard escorted Annie to the First Street diner, where he ordered oatmeal an scrambled eggs for them.

Annie managed a weak smile when she paid the bill.

Persistent, Gerard coaxed her to the Christian Science Reading Room where they rested in arm chairs before a wall of books.

Annie relaxed for the first time in months as Gerard read the want ads out loud. She listened to whispered descriptions of needed dishwashers and painters, until she heard,

That’s it, Annie said. Can you cook?

Back to Inspirational Short Stories >