Five-hundred and seventy-six years later, when the dreamer, Catherine Marksteiner, stepped upon the sacred ground of Mont-Saint-Michel, St. Joan’s spirit welcomed her. 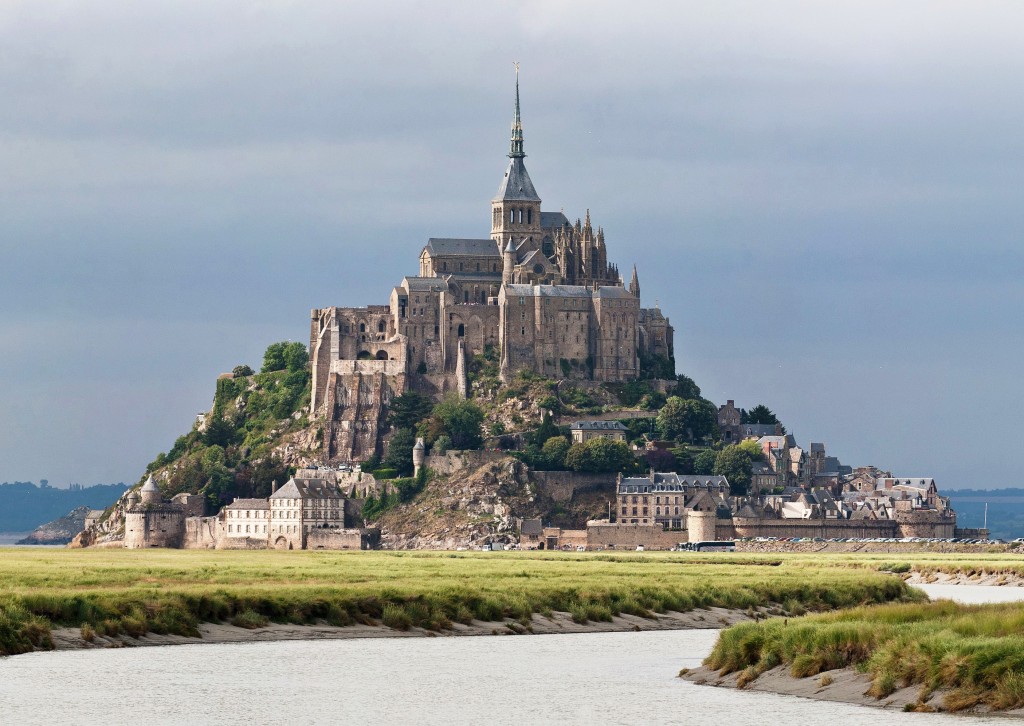 With history threatening to forget her, St. Joan determined France should build an edifice worthy of God’s glory on the unconquered rock of Mont-Saint-Michel, one St. Joan’s enthusiasts could see with their own bodily eyes. She planned the Dome of St. Joan would rise on the empty west platform of the Abby, a pink crystal greenhouse where butterflies would surround a marble baptismal font. St. Joan determined not to abandon the misty halls leading from earth to heaven until her monument was in place. Every humble woman needed to know their futures were achievable, if they possessed faith in their God-given dreams.

At the southern parapet, Romèe Laurent stood like a captain of a great lumbering ship. The weather held at fifty degrees and white fluffy clouds sprinkled the sparkling sky. The bay’s fragrant marsh grasses moved with the wind, while Romèe waited at his post.

Mont-Saint-Michel’s soaring spires, the pink-bleached stones of the outer walls, the sudden splashes of tender gardens within its confines, even the moldy corners on the ancient stairs claimed Romèe’s increasing allegiance. No metal detectors, drug-sniffing dogs or arrogant guards were needed to keep out the terrors of the televised world. Tourists felt safe.

“Sirrah, your marriage candidates have arrived.” Anton Bermont slapped his cousin’s back.

Romèe’s dark brows lowered, as he focused on the tour bus below. The morning sun had already warmed the wide stonework under his elbows. Romèe checked his watch: ten o’clock.

The first tour bus in a line of eight pulled as close as possible to the south entrance. Anticipating tips, the driver dismounted and helped each traveler off. A mother and daughter of identical height were his last two passengers. The girl was a beanpole with red hair long enough to sit on.

The slim urchin, who claimed his attention, touched her thick-soled gym shoes to the roots of Mont-Saint-Michel, or his. The entire island seemed to reach for the heavens. Life itself seemed lighter. Romèe let out a long sigh. He hadn’t realized he’d been holding his breath from the moment he first spied the redhead.

The girl’s white haired mother was plumper, ‘zaftig’ his father would say, meaning soft and still juicy. Romèe wondered if all sons hated how the words of their parents stuck in their heads.

“Oh, look,” Anton teased. “I have another red-headed, Botticelli model.”

“This model has her mother as chaperon. You better mind your manners.”

His blond older cousin, an artist, deftly managed the eight-unit Hotel de Bermont, which allowed him ample opportunity to sketch. Anton sketched all his hotel guests. Romèe wasn’t at all sure his cousin should spend time with the young woman below; until he, Romèe, found the opportunity to talk to her, to see if a brain lay under those long folds of red hair, to see if a spark of interest might be shared between them. Actually, just to see her.

“From the amount of luggage, I’d say they’re probably the guests we have booked for the week,” Anton said. “The marsh grass spoils even the off-season.”

Romèe did not mind the smell of the fresh greenery on the flats and thought the diminished tourist traffic a blessing. “Could you teach me to paint?”

“Your father would brain me.” Anton laughed. “You’re lucky he hasn’t insisted you become a priest.”

“No vocation for the priesthood.” Romèe kept his eye on the redhead below. She chose one of the heavier pink bags from her mother. Affectionate acts renewed his faith in people. Not everyone was out to better themselves at someone else’s expense. And this daughter, obviously, had been taught consideration for others.

“Visit is the operative word.” Romèe smiled. “At least I convinced my father I had too many women chasing me to seriously consider the priesthood.”

At thirty-two Anton had been engaged for five years to a dark-headed girl Romèe had only seen once. Providing the orphan a home for a year, Aunt Gail spirited her off to a mainland convent school; because Anton admitted he had fallen in love with the sixteen year old. A further complication developed when Anton’s father died. Aunt Gail refused to break her period of mourning, which had been dragging on for two… no three years. Anton had faithfully mailed a letter to his fiancée every day since the day she had been trundled off to school. He envied Anton’s assured affection from the young girl. He prayed Anton would be allowed to marry soon.

Anton said, “I thought you started work with your father on Monday?”

“Yes, yes,” Romèe said. “I wouldn’t mind trading the life you lead here for my job with Father. Besides, how much higher do our fortunes have to rise?”

“Never enough, that’s the Laurent motto. No one is ever too rich.”

“Or too thin.” Romèe continued to follow the progress of the stick of a girl with her glistening tent of red hair from his vantage point on the rampart walk overlooking the gates. He liked the way she walked; her sapling legs easily outdistanced her mother. She constantly danced back to encourage the older woman up the path’s slight incline. All the energy in the world seemed contained in her lithe movements. Lambs jumped straight up with the same exuberance and he half expected her to drop the bags she carried to leap with an internal surge of joy. The beaming young woman below shone as if she had discovered a Christmas tree stacked with presents all for her.

The cousins, Romèe and Anton, continued to watch the redhead as she stepped under the shadow of the Artichoke house’s second-floor archway which spanned the narrow walk. The mother dropped a suitcase, adjusted her sunglasses and then ran after her daughter, calling in a desperate tone.

Romèe felt his own heart skip a beat at the hint of doom.

The girl emerged into the sun on the far side of the offending shadow. Joining her, the mother leaned against the stonewall. Instead of retrieving the luggage, the daughter stretched out her arm to point at the wall next to her mother’s head.

The older woman jumped a foot, as if expecting to find a lizard next to her ear. Then arms across each other’s shoulders, the mother and daughter read the inscription on the weathered stone.

He did not agree Mont-Saint-Michel was a terrible place. When the place was a prison during the French Revolution, some guard or prisoner could have carved the curse.

Ever since he was thirteen, summer vacations on the Mont had offered up a young damsel determined to woo him. Romèe wanted to find a heart to love for the rest of his life. He recognized contentment in his mother’s green eyes. His parents possessed a bond he wanted to emulate. Romèe was convinced his love of the Mont would eventually deliver up the special person he was intended to make his life-long companion. A certain urgency accompanied his search for a potential mate on this final trip. He had graduated from Ann Arbor’s business college in the States and summer-long vacations at his aunt’s hotel would be shortened to weekends.

Anton and Romèe returned to the hotel through the second floor’s back terrace. As the two young men exited out the first floor entrance, they nearly knocked over the redhead.

“Can you help us?” she asked. “We’re staying here. The Marksteiners?”

“I better retrieve your mother’s luggage,” Anton said, brushing past the girl on a beeline for the abandoned bag.

As Mrs. Marksteiner spied Anton, she raised her umbrella, thumping him soundly on the shoulder as he stood up with the heavy bag.

“Mother, he is from the hotel!” the girl shouted back.

Romèe cringed. He hated loud women and scenes. He backed into the hotel lobby. The half-door to the office beyond was open, and he reached over the small writing desk, unlatched the bottom half of the door and disappeared past the small workplace into his aunt’s drawing room. Aunt Gail’s rooms were brighter than the outer lobby. The flowered chair near the bay window was softer than he liked.

“Whatever is the racket?” Aunt Gail asked.

“Americans,” Romèe explained, watching the melee from the bay window.

Mrs. Marksteiner allowed the battered Anton to carry her bag, explaining her actions while waving the offending umbrella around enough to clip the poor chap across the knees.

“Why don’t you rescue your cousin?” Aunt Gail said, peering over his shoulder.

“I should,” Romèe said, not moving very quickly to the entrance hallway.