Mrs. Forbes strolled down the aisle between two rows of sewing machines where her busy students were mastering the art of straight stitches. Stopping by the enamel cutting table, she ran the back of her hand over pink marbled satin. The afternoon sun flooding the home-economics classroom added shimmering elegance to the fabric.

“A thing of beauty,” she told her student.

The stiff bolt of cloth cost fourteen nights of baby-sitting for sticky, unhappy kids and their cantankerous dogs.

Keeping her pride in check, Etta Jean added. “Daddy let me tag along.” 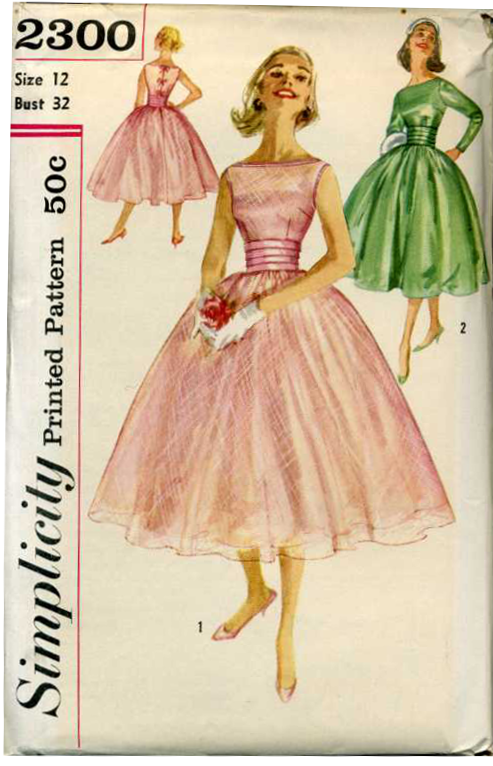 Following the Simplicity pattern directions, she pinned the jigsaw pieces down. Thoughts of her rival distracted her. Bernice would be in Latin class now with Orlando. If Orlando took Bernice to the prom, Bernice would wear a store-bought dress all the way from the county seat in Madison. Bernice was boney, a twig really, but a full skirt and crinolines would provide her with fake hips. Bernice would also need a padded bra.

The deep round neckline of Etta Jean’s prom dress would reveal beginning cleavage. She opened the prongs of the shears. Distressed at making virgin cuts in the beautiful material, she looked around for Mrs. Forbes.

Mrs. Forbes’ adept hands melted the sea of satin into Princess-line dress parts, while Etta Jean concentrated on Orlando’s suitable attributes. Another thing against Bernice was that she took Orlando for granted, even poking at his chest when she talked to him. Etta Jean would treat him like the man he was.

Later, Orlando stopped her on the way to her gym class. While other students pushed into them on their way to assigned rooms, he spoke directly to her. “Bernice has to take her cousin from Madison to the Prom.”

As he stroked her hand, a dark curl escaped from his silly pompadour. Orlando dropped her hand to brush his hair back. He pouted sweetly. “Don’t you want to go with me, either?”

She laughed with relief. “You’re tough.”

His smile weakened her knees. “What color’s your dress?” he asked gruffly, then added. “I’m ordering a cummerbund for my tuxedo.”

“Pink.” Etta Jean sought to prolong the conversation. “What color is Bernice’s dress?”

“Mauve, tulle.” Orlando shrugged. “What is that?”

“I like pink on girls.” Orlando flashed his mirror-rehearsed smile, one eyelid slightly relaxing. “See ya.”

Sewing the dress took longer than expected. After the darts were in, Etta Jean hemmed the neck and arms in long, timesaving stitches with sweaty palms. Mrs. Forbes tsk’d, but came to the rescue and set the hem straight Friday afternoon before the dance.

Daddy and Mother said they would be, “Waiting up.”

Orlando held the door of his father’s Oldsmobile open for her. Her hair decided, however, not to stay pinned-up in the whirlwind of the convertible ride. They parked behind the gym. Orlando waited as she brushed out her long dark hair.

“Keep it down.” Orlando lifted the back of her hair off her neck. “The other girls all hate your waves.”

The dance was a whirl of tight smiles. In the darkened hall, trellises covered in plastic flowers and white Christmas lights didn’t hide the rank gym smells. Orlando disappeared with the guys, coming back emboldened with a whiskey breath. Etta Jean let him hold her tight in front of Bernice and her cousin. Their heads of strawberry blonde hair matched each other. Orlando refused to let the cousin cut in, which Etta Jean knew, spoiled Bernice’s plan for trading partners. Etta Jean kissed Orlando’s cheek for Bernice to catch. Orlando had allowed himself belong to her, at least for the night.

But with the convertible top up at the lake, Orlando failed to listen to the frogs or appreciate the cool, lilac scented air.

Etta Jean cradled his relaxed head firmly in her hands before she banged it against the window. “I said no.”

“I want you.” Orlando ran his hand slowly up her thigh under the satin. “To belong to me.”

Orlando ruined her dress. Her parents were in bed when she crept up the stairs. As she slipped under the covers, she felt Orlando’s hands still touching her.

When Orlando visited three months later, his skin looked bleached. He asked Etta Jean to marry him in front of her parents, who clapped Orlando on the back until his smile returned; if not for her at least for them. He wouldn’t touch her when they were alone. On their wedding night, she reached across the bed, but Orlando rolled away saying they might hurt the baby.

“That’s not it,” she said, returning to her tearless pride.

In public, especially in front of Bernice’s family, Orlando held her hand. For the holiday family crowds, he pulled Etta Jean on his lap. For the inevitable group photos, his arm went arm around her, tugging her close.

Looking directly into her eyes, Orlando would say for them to hear, “She’s all mine.”

Feeling the knife of irony, Etta Jean had hugged him back for all to see.

Orlando nailed her into the tight box of motherhood. In the hectic hospital scene, her early screams from the devastating pain and Orlando’s useless panic produced an unmarked girl child. The doctor said Etta Jean’s damaged insides wouldn’t permit any more babies. She shocked the doctor by smiling. She wanted more children but the chance of making love again seemed a remote joke. She heard the doctor lecturing Orlando not to demand sex too soon, that there would be no more children.

She wanted to yell out into the hall, “He only touched me once!” But, she kept her wits together for the child slumbering in her exhausted arms.

Orlando softened his defenses around the child, Matilda. When she began to crawl, poking at his face and making sounds he interpreted as “Dada;” he was at her mercy. Rolling on the floor like a great hound, he let the baby climb all over him. “She’s a beauty just like you,” he said.

Etta Jean controlled an impulse to look behind the couch to see who had sneaked into the room to benefit from this news. But they were alone. Her untouchable man and their infant daughter tumbled about, as Etta Jean sat carefully avoiding Orlando’s feet as he lolled about on the rug.

Etta Jean waited for the baby’s afternoon nap before hanging diapers on the line out back. She noticed Orlando got down from the tractor and came across the lane from the barn. Etta Jean thought he was headed for the water pump, surprised to find him behind her.

She stood silent and still, as he lifted her dress. After the standing ravishment, Orlando kissed the side of her cheek. Etta Jean heard him zip his fly. She watched him drive the tractor and plow away, before she noticed tears made her face as wet as her thighs. Orlando’s red hat disappeared down the west hill; before she dropped the diaper she still held and went in to bathe. Orlando had mounted her as coldly as if they were rutting farm animals.

Resting her head on the back of the ceramic tub, she looked at her jumble of clothes. The bib of her white pinafore was dirtied from his rough hands. She missed him after sundown, her body tingling disloyally, thirsty for him. Later, Etta Jean pressed one of the undershirts she was folding to her face and thought she could smell his skin.

As she let the shirt fall into the basket, Orlando touched her face. “I’m sorry,” he said.

On a Friday night, after their first crop of wheat was ruined by sudden blight, Bernice’s younger brother took Orlando out for a birthday drink. Orlando came home angry after being told that she’d trapped him. He threw his high-school basketball trophy and her mother’s vase of blue glass roses right through the front room plate-glass window, waking Matilda.

Etta Jean calmly brought the stained satin prom dress into the kitchen, where he was drinking milk out of the pitcher. She held it high on the hanger. The dress was a badge of her honor. The instant fatherhood, his idea.

Orlando stormed up to bed. Saturday morning he left the house before breakfast.

When he returned with the window glass, Etta Jean opened the door. “I thought you left me.”

Busy with the repairs, Orlando said, “Who would have me?”

The next time she touched Orlando in bed, he wept. They didn’t make love then; but when they did, their passion resulted from the long wait for affection and its tender gratitudes.

Holding each other after making love on their eighteenth anniversary, they waited to hear their daughter, Matilda, return from her Prom. They had kept Etta Jean’s dress in readiness, intending to teach her its lesson, but the point seemed lost. They recognized young love in the offing.

The prom dress outlasted them, as Mrs. Forbes promised. Their granddaughter sold it to the antique shop in Madison. Hanging stiffly on the iron hanger, the faded pink satin shed a somewhat stark romanticism to the emptied drawers and vacant mirrors surrounding its gentle radiance.

3 Replies to “The Prom Dress”